Make a Vodka Watermelon
Wow your party guests by serving a refreshing drunken watermelon. Giving a party-friendly fruit a boozy twist, vodka watermelons are a unique novelty drink-snack-combo worth trying. Try injecting the whole fruit with vodka or preparing a punch to serve in the hollowed-out watermelon right. Whichever way you choose to serve your vodka watermelon, it’ll be a showstopper at your next party, picnic, or barbeque. Just be sure you inform your fellow party-goers that the watermelon contains alcohol so that everyone can enjoy it responsibly.

Method 1 of 2:Infusing a Whole Watermelon

1. Trace a circle onto the watermelon rind using your vodka bottle’s cap 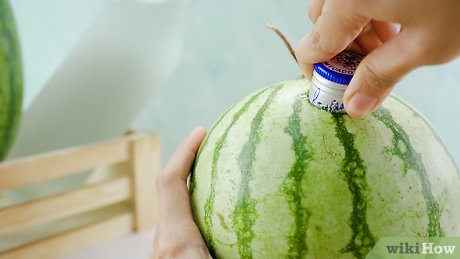 It’s important to make sure your watermelon sits still without rolling over. If it’s not stable, you’ll end up with a sloshy, pink mess in your refrigerator!
Cut a thin slice from the rind at the base of the watermelon, if necessary, so that it doesn’t rock back and forth or spin around. But just don’t cut deep into the edible flesh or else the watermelon might leak.

It may take between 12 and 24 hours to fully infuse the watermelon, so be sure to plan ahead.

2. Cut out the circle to create a hole in the watermelon

Cut out the circle to create a hole in the watermelon. Use a narrow kitchen knife or a pumpkin carving tool to cut out the hole you just traced. Pierce through the rind and cut down through the greenish-white layer until you reach the pink part.
Keep the cut-out piece of watermelon to use as a plug if you intend to transport the watermelon, or feel free to discard it.

3. Poke holes into the pink watermelon flesh using a skewer

Poke holes into the pink watermelon flesh using a skewer. Extend the pointed end of a barbeque skewer into the round hole you just cut. Press it into the watermelon, puncturing the pink fleshy part as if you’re aerating it. Repeat this a few dozen times until you’ve created plenty of spots for the alcohol to seep into.

Avoid pushing the skewer through the other side of the rind as the vodka might seep out.
This step is essential in creating a successful vodka watermelon. If you skip it, the alcohol won’t really seep into the fruit at all.

4. Pour vodka into the watermelon through a funnel

Press the base of the funnel gently into the pink flesh to help stabilize it.
If you have a 10 lb (4.5 kg) watermelon, it’ll absorb around 3  c (710 mL) of vodka total. This could take between 3 to 6 pours, depending on the size of your funnel.

5. Wait until the vodka seeps into the watermelon before refilling the funnel

If the vodka from your first pour doesn’t seep in after 3 or 4 hours, try poking more holes into the flesh using a skewer, or use a spoon to break up and scoop out some of the flesh to create more space.
You’ll know the watermelon is full when it stops absorbing more vodka and your funnel doesn’t drain out.
Once the watermelon has been totally infused with vodka, you’ll see a sloshy pink liquid inside instead of the firm melon flesh.

6. Refrigerate your vodka watermelon overnight before the party

Refrigerate your vodka watermelon overnight before the party. Cover the hole with some plastic wrap and chill down your novelty drink in the fridge for about 8 hours. Keep it totally upright so the insides don’t spill out.

7. Serve the vodka watermelon drink immediately after removing it from the fridge 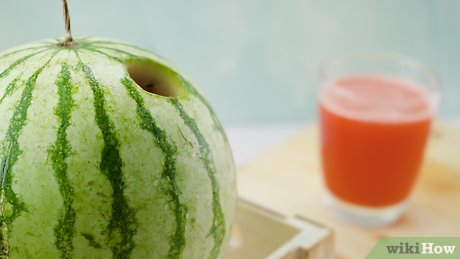 Serve the vodka watermelon drink immediately after removing it from the fridge. This novelty drink is best served chilled, so don’t let it sit out for very long. Have someone hold a cup over the hole in the watermelon rind. Then tip the whole watermelon over to pour out the drink. Do this carefully, but have fun making a spectacle of your novelty cocktail and its dispenser!

If you’d like, pop the overturned vodka bottle into the hole for a fun display. Just keep the cap on so you don’t overfill the watermelon and make a mess.

You won’t be able to slice and serve watermelon chunks; the result of this process will be a boozy fruit juice.
Avoid putting a tap into the hole; fruit chunks will clog it up.

1. Slice off the bottom and top off of the watermelon

2. Scoop out the pink watermelon flesh using a melon baller

If you don’t have a melon baller, try an ice cream scoop, a spoon, or a cookie dough scoop instead.
Focus on making neat, circular watermelon balls if you plan to serve them whole. But if you’re going to blend up the fruit, feel free to remove the flesh in chunks.

3. Soak the watermelon balls in vodka for a few hours to prepare a fruit-filled cocktail

Soak the watermelon balls in vodka for a few hours to prepare a fruit-filled cocktail. Pour about 3  c (710 mL) of vodka into the bowl containing the watermelon balls. Cover the bowl with plastic wrap and chill the vodka and balled fruit in the refrigerator for around 3 to 4 hours.

With this method, you’ll be able to fill your guests’ glasses with pink watermelon-infused vodka and floating fruit bits.
Place the rind in the freezer while the alcohol and fruit chill in the fridge. This way, your watermelon punch bowl will keep the drink cool during the party.

4. Marinate the watermelon balls in vodka briefly to serve them as a snack 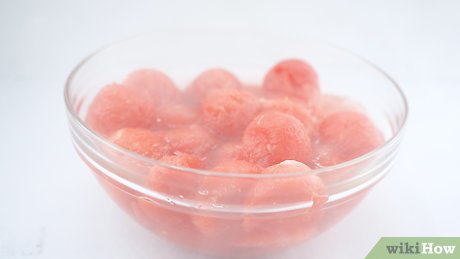 Try serving the whole watermelon balls whole if you’d prefer a refreshing, boozy, bite-sized snack to a beverage.
After draining the watermelon balls, save and refrigerate the remaining watermelon-infused vodka for future cocktails.
If you soak the balled fruit for any longer, it will become mushy and would be better served in a drink.

5. Blend and strain the watermelon flesh if you prefer a boozy fruit juice

Blend and strain the watermelon flesh if you prefer a boozy fruit juice. Use a blender or food processor to liquefy the watermelon chunks. Do this in batches, as you’ll have lots of fruit to blend. Once you’re done blending, pour the liquid through a mesh sieve to strain out the little chunks and seeds.

Add about 3  c (710 mL) of vodka and chill your drink in a large bowl for about 3 hours before serving it in the watermelon punch bowl.
Keep the watermelon rind in the freezer while the drink chills down. This way, it’ll keep your drink cool when you’re ready to serve it.

6. Serve the boozy fruit in the hollowed-out watermelon bowl 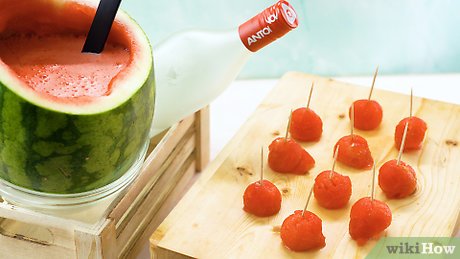