Make a S’more
It is unclear who first created this treat, but the earliest s’more (some more) recipe can be found in the Girl Scouts handbook of 1927. Tradition also says that these are consumed quickly, prompting further calls for “S’more!”. The traditional s’more is made with marshmallows, graham crackers and a few pieces of chocolate. Making your own at the campfire or by microwave is one of the easiest cooking skills there is.

Method 1 of 4:Making S’mores Over a Fire

Start your grill, campfire, or wood fireplace. You can make your s’mores over any sort of fire. Keep in mind, however, that the fuel you use may also influence the flavor of the marshmallow. If you are working outdoors, make sure to follow safety precautions by having water or fire extinguisher near by, and to avoid windy days.
If you are making a campfire, be sure to use clean, dry wood, and to properly rein in the fire with a ring of stones. Do not use accelerators.

2. Break a graham cracker in half

3. Unwrap your chocolate and break it into smaller pieces, if necessary

4. Set the chocolate on the graham cracker

5. Skewer the marshmallow and toast it

If you are camping and wish to use a stick, be sure to shave the tip into a fine point; this will make it easier to skewer the marshmallow and get rid of any bark.
If you are using a metal skewer, make sure that it has a heat-resistant handle so that you don’t burn your hand.
You can tell if the marshmallow is done if it is golden-brown in color. You can continue roasting it, set it on fire, or remove it from the fire at this point.

6. Transfer the marshmallow to the chocolate 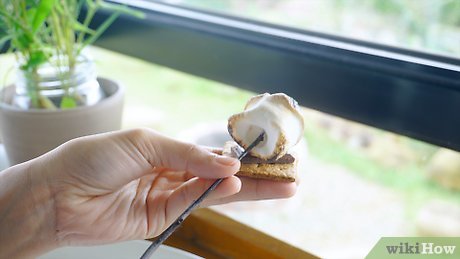 7. Place the remaining cracker on the marshmallow and chocolate

Place the remaining cracker on the marshmallow and chocolate. Press down on the graham cracker slightly. The hot marshmallow will melt the chocolate and help fuse everything together.

8. Remove the skewer and serve the s’more

Remove the skewer and serve the s’more. Wait a few seconds before serving the s’more. This gives the marshmallow some time to cool down so that it doesn’t burn your mouth.

Method 2 of 4:Making S’mores in an Oven

If you choose to broil your marshmallow, set the oven to “broil,” and let it heat up.

2. Break your graham cracker in half

3. Place the halves on a baking sheet

Place the halves on a baking sheet. You will need to heat the entire s’more in the oven.

4. Place the marshmallow and chocolate on the graham crackers

Heat your s’more. Do not put your s’more together just yet; you will be doing that once everything has heated up. Instead, place the baking sheet into the oven. The chocolate will melt a little, and the marshmallow will get toasted.

If you are using an oven, heat your marshmallow for three to five minutes.

If you are broiling your marshmallow, it may take anywhere between a few seconds to one minutes.

6. Take the baking sheet out of the oven 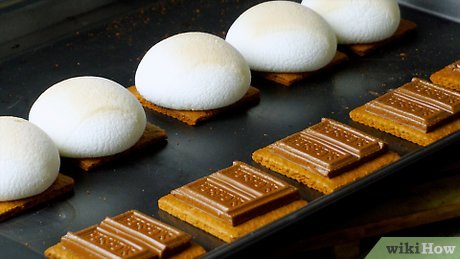 Take the baking sheet out of the oven. Once both the chocolate and marshmallow have baked to your liking, remove the baking sheet and set it down on a heat-resistant surface. Be sure to use an oven mitt or a potholder to protect your hand against being burnt.

Method 3 of 4:Making S’mores in the Microwave

1. Break a graham cracker in half

Break a graham cracker in half. Set one of the halves on a microwave-safe dish, and set the other half aside.
Consider placing a paper towel on the plate beneath the graham cracker. It will absorb any moisture that forms and prevent your graham cracker from becoming soggy.

2. Place a marshmallow on the graham cracker 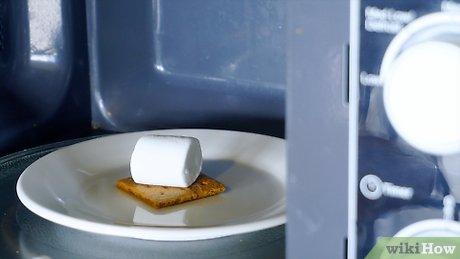 4. Place a piece of chocolate on the marshmallow

5. Place the remaining graham cracker on the chocolate and serve

Method 4 of 4:Making S’mores With Variations

1. Add fruit to your s’more

Add fruit to your s’more. You can make your s’more more flavorful by adding a slice or two of fruit to it. Strawberries and bananas taste great when paired with chocolate, but you can also use other types of fruit too, such as raspberries.

2. Substitute the chocolate for gourmet chocolate 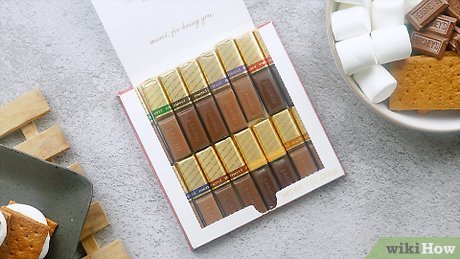 Substitute the chocolate for gourmet chocolate. Instead of using plain old milk or dark chocolate, consider using chocolate filled with caramel, mint, or peanut butter instead. You can also use chocolate with ground nuts in it as well.

4. Use other candy instead of chocolate

Use other candy instead of chocolate. You can substitute the chocolate for other candies, such as peanut butter cups or chocolate-covered wafers. You can also add candy to your s’more.

If you like peanut butter, switch the regular chocolate out for a peanut butter cup. Consider adding a banana for more flavor.
For an extra creamy flavor, skip the chocolate and replace it with dulce de leche. Use cinnamon graham crackers instead of regular ones.
For a unique twist, add a strip of red or black licorice on top of the chocolate just before you set the marshmallow down.

Try roasting the entire s’more. Assemble the entire s’more first, then wrap it in a lightly-oiled piece of foil. Fold over the ends of the foil packet to seal the s’more inside. Heat the s’more packet in the coals of a campfire for two to three minutes. Be sure to turn the packet often, then take it out of the fire using a pair of tongs.
You can also heat the s’more packet over a grill. Set the temperature to 350°F (177°C).